So my birthday is not actually until next week. But today a package came in the mail and my son told me it was my Birthday present (another one coming). He said you can open it now or wait until your birthday. It took me about fifteen minutes and I said I am going to open it. I opened the big box and there was a nice fancy bag in the box with a white bow tie and a note on it. I opened the bag and there was a long thin box.

When I opened the thin box and saw what was in it, it brought tears in eyes. It was a beautiful SEIKO PRESAGE wristwatch with a black band. It is simply stunning. I love watches and really like the SEIKO brand. This SEIKO is called the Cocktail. The following is a excerpt from one a popular and prestigious site I follow called Hodinkee (www.hodinkee.com). They did an article back in August 15, 2017

The Seiko Presage Cocktail Time is a bit of a cult classic amongst Seiko enthusiasts. First launched in 2010, the Cocktail Time was created in partnership with Shinobu Ishigaki, who is one of the world’s most highly regarded mixologists, and the proprietor of a bar in Shibuya district, Tokyo, known as Ishinohana Bar. Ishinohana Bar and Shinobu Ishigaki have been featured on Anthony Bourdain’s series, “No Reservations,” and his carefully made and elaborately garnished cocktails were the inspiration behind the original Cocktail Time watches, with their colorful sunburst dials. They came in three “flavors” – Cool, Dry, and a 300 piece limited edition Sweet model – used Seiko’s automatic 6R15 movement, and quickly became cult favorites. 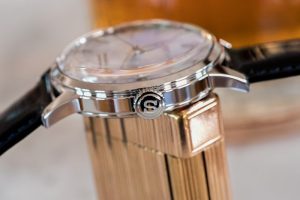 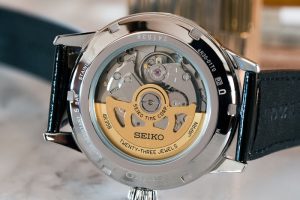 Caliber 4R35 is part of the 4R family of movements which Seiko introduced in 2010 – these are a step up from Seiko’s entry level 7S series of movements, and offer the ability to hand-wind, as well as a stop seconds function. Frequency is 21,600 vph, and 4R35 runs in 23 jewels, with a power reserve of 41 hours. As is typical of Seiko movements at this price point, finish is cleanly utilitarian and it looks exactly like what it is: a machine designed to function precisely and reliably, rather than an exercise in haute horlogerie finishing.

So as you can see this is a very stylish and classic watch. This is the second one my son has given me. He bought a stunning Gucci several Christmas ago which I cherish. This new Seiko has easily become one of my top favorites with the GUCCI. He has very good taste. “KEEP ON TICKING“